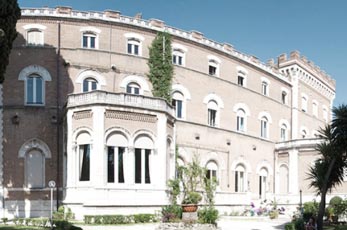 
Istituto Marymount is an officially recognized private Catholic school, founded in 1930. It welcomes Early Childhood, Primary and Middle School students and aims to implement the fundamentals of the Religious of the Sacred Heart of Mary providing education and training based on Christian values. The school welcomes students of different cultures and of a changing world.

The bilingual project offers the opportunity to deepen and enhance the study of the English language, adding value to our school. The commitment of all teachers ensures that our young pupils acquire the basic principles of Italian and International culture, so as to go forth into the world with confidence and competence. One of the primary goals is to form students who are well prepared and with a profound sense of religion, through the implementation of the Mission of the Religious of the Sacred Heart of Mary which is shared by all.

The villa where the headquarters of the Istituto Marymount was built in 1910, is located on Via Nomentana, above the ancient catacombs of St. Agnes. It was initially a country residence of a noble family, and the site of the Russian Embassy before the revolution. It was finally purchased by the Sambuy Counts and became their private residence. When Mother Butler, founder of the Marymount schools, came to Rome in 1929 to pay homage to Pope Pius X, he asked her to establish a branch of the Congregation of the Sacred Heart of Mary in the eternal city. This Villa was chosen because of its proximity to the Basilica of St. Agnes. This is where the first sisters were sent to begin the school.

The Boarding School hosted young girls coming from well-to-do families, to prepare them for entry into adult society. Over the years the school became bigger and, at the end of the Second World War, after a period of great difficulty, the process to obtain legal recognition began and was finally obtained in 1962.

During the Eighties, enrollment increased and the school began welcoming children to four levels of edication: early childhood, primary, middle school and high school. Male students were also accepted. The high school was later closed in 1998, and since then, all educational efforts have been aimed at offering a full bilingual program for early childhood, primary and middle school levels. In 2001 the school was officially recognized by the Ministry of Education and the number of pupils has grown year after year, until reaching the current number of 645 pupils. The school falls under the the supervision of the Provincial of the Religious of the Sacred Heart of Mary and the campus is owned by the Congregation.